The Carolingian Company of Calivers  (yes, Calivers.  Not Calipers.  Or Cavaliers) is a melee unit headed up by +Justin Aucoin.  As with the Commander of the Rapier Army from Pennsic, +Brennan mac Fearghus wanted to acknowledge them without necessarily giving them an SCA award.  So I wrote up this:

Manifesting our royal pleasure for the establishing of companies for the practice of arms in defence of the Realm, and having understood and been credibly informed that the Carolingian Calivers have studied the arts of warfare and practiced those same arts with exceptional and notable diligence during the late Pennsic War; therefore We, Brennan, King of the East, do now, as a mark of our singular favor, give, grant and accord to the company aforenamed license as the King’s Own Company of Calivers, with the right and privilege to bear arms and weapons in the Royal Presence, and freedom from all rents, taxes and monetary duties otherwise appertaining, the said rights, licenses, privileges and freedoms to be observed for the duration of our reign.  Done at [place] upon [date].


This was given out yesterday to the now King's Own Company of Calivers.
Posted by Alys at 7:07 PM No comments:

Last Friday, the night before his Coronation (or possibly the very early morning of his Coronation, I'm a little hazy on the precise time), +Brennan mac Fearghus sat down with me and said, "I want to give Malocchio a thing, but not a Thing, you know what I mean?"   Translated out of NJ-speak, Brennan wanted to reward Don Lottieri Malocchio ( +Graham Sternberg ) for his work as commander of the Eastern Rapier Army at this past Pennsic, but did not feel right giving Malocchio an Order of Valor because Brennan was not King at Pennsic.   So he wanted me to come up with something else, preferably period, that he could do to recognize Malocchio.

What we ended up agreeing on was a License for Malocchio to raise, equip and train troops in the Crown's name.  From a couple of sources, I managed to cobble together appropriate language, and then I did a truly horrifying thing:  I calligraphed the License myself using my best attempt at 16th cen. Italian book hand. 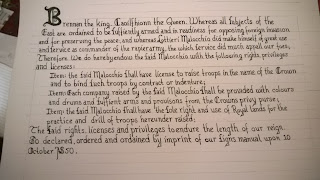 For just getting back into calligraphy after 30 years (and that was pre-SCA for me), it only looks slightly like a monkey with a crayon.

Here's what it says:

Brennan the King.   Caoilfhionn the Queen.  Whereas all the subjects of the East are ordained to be sufficiently armed and in readiness for opposing foreign invasion and for preserving the peace; and whereas Lottieri Malocchio did make himself of great use and service as commander of the rapier army, the which service did much appall our foes; Therefore We do hereby endow him with the following rights, privileges and licenses:

Item.  The said Malocchio shall have License to raise troops in the name of the Crown and to bind such troops by contract or indenture;

Item. Each company raised by the said Malocchio shall be provided with colours and drums, and sufficient arms and provisions from the Crowns privy purse;

Item. the said Malocchio shall have the sole right and use of Royal Lands for the practice and drill of troops hereunder raised.

The said rights, licenses and privielges to endure the length of our reign.
So declared, ordered and ordained by the imprint of our signs manual upon 10 October A.S. 50.

The notion of having drums was met with much enthusiasm on the part of the rapier contingent of the Great Northern Army.   :-)

Irish Boasts for the ascension of Brennan II and Caoilfhionn II

As part of their efforts to do a early Irish Coronation ceremony, +Brennan mac Fearghus and +Meredith Bailin Hull  wanted their herald to lead them in with boasts about each of them and their deeds.  +Murray Blehart was having a little trouble coming up with something with the right "feel" and I offered to do some research into the Irish Annals (books written recording the history of Ireland, interspersed with snippets of poetry honoring people in the news -- sort of an Irish version of the Anglo-Saxon Chronicle or USA Today).

For Brennan, I extracted and adapted the English translation of a poem about a dead Irish king, found in Annals of the Four Masters entry M914.10. (English version) (Gaelic version)   About 90% of the poem could be lifted directly, so with minimal editorial alterations, it became this:

Brennan, Fergus's  son, better than all children, Prince of the East, fierce his valor
It was he that ruled our people in days of good fortune and glad victory.
Flowing flood of great wealth, gift-giver, war-band leader,
Hero who subdued the Dragon, leader of the Tyger's men of august mien,
Pillar of dignity over every head, fair chief of valor, caster of the spears
Sun-flash, noble, pleasant, head of the men of hospitality is Brennan.

And that's what Malcolm proclaimed as they processed into Court to accept their Crowns from Mistress Mercedes, acting as Regent of the Kingdom.

Finding something for a female monarch was harder, but I pieced together bits and pieces from various 10th cen. Irish sources and proposed this for Caoilfhionn.

Hail, the illustrious black-haired lady of the charming face, Caoilfhionn, Faelan’s daughter,
By the hosts of people assembled is she loved, a gem of the full precious stone,
Fair and lovely, noble in her strength; great is her renown in every good thing.
Wise woman who enforces the law upon all, glorious lady who dispenses peace all round.
Queen of the Easterners, brilliance of the sun, the sun upon her cheek.


The phrases and descriptives are all lifted from various 10th cen. sections of the Annals, but they were not combined to describe one person this way.  (Yes, "black-haired lady of the charming face" is precisely how one Annalist described a woman he was praising).  I think with another day to fiddle, I could have half-assed this one less than I did.

However, as it turned out, my proposal wasn't to Caoilfhionn's taste and it wasn't used, so the only evidence of my half-assed effort will be found here.