Malcolm complained that this one was full of tongue-twisters, but I'm really sorry-not sorry  :-)   Although honestly, I should have remembered I did this to the herald and offered to read it myself.


Forasmuch the royal highness of our splendid progenitors Akbar and Khadijah, in their abundant munificence, caused the Order of the Silver Crescent to be created and constituted into law; and forasmuch as the said Order has put rightful petition before Us to add Brennan MacFergus to their number; and forasmuch as We have, from our own certain knowledge, discerned much good, great and substantial benefit to the Realm from the deeds and labors of the said Brennan; Therefore, We, Ivan and Matilde, Tsar and Tsaritsa, with our especial grace and favor, do now give, grant and confirm unto our servant Brennan the status, repute and renown of a member of the aforenamed Order, with all rights, privileges, freedoms, liberties, emoluments, royalties and commodities appertaining thereunto.  That this our gift may remain unshaken by any sinister persecution, we have caused this charter to be written and validated by the protection of our signatures.

Two Writs for the Peerage

Writs are fun to write because they are so close to the original period texts, requiring fewer modifications than most.   There are lots of letters summoning persons to appear before Crowns.

They are also easy to write up on short notice.  :-)

Here are two Writs that went out on Saturday, both for very dear people.  I pulled them on very short notice from the same set of source texts -- letters by Margaret of Anjou -- so they do sound essentially similar.   But, there is not a lot of variation in Writ language anyway.


Ivan the King and Matilde the Queen, to Raziya bint Rusa, King’s Champion of the Arts and Sciences, greeting.  Whereas we have ordained our parliament to be held in the Crown Province of Ostgardr upon the Feast of Saint Scholastica, being 10 February, for the discussing, ordaining and making of new Champions of the Arts, we hereby command and direct that you, who are held to do homage to us, appear there in that same place personally to answer the question of whether you will accept elevation to the Order of the Laurel.  Given at Buckland Cross on the first day after the ides of December in the fifty-second year of the Society.

Ivan the King and Matilde the Queen to Mistress Rhiannon the Curious, greeting.  We command that, giving up all other business, you attend by every means you can at our colloquium which shall be held in the Crown Province of Ostgardr upon the Feast of Saint Scholastica, being 10 February,  for discussing with us and with other magnates of our realm who shall then be present, assembled in the same place, concerning certain arduous business touching us and our kingdom, to wit: whether you will accept elevation to the Order of Defence.  So ordered and commanded upon 16 December, in the fifty-second year of the Society.

Sometimes I think scribes hate me.  :-)

Sometimes, the calligraphy and illumination end of the collaboration has ideas that make my life challenging.   When writing a legal charter-style text, there are certain letters that are easy to start with -- B, F, W, I, and S are usually quite adaptable.

Then there's that moment when the scribe says, "The text can be no more than 150 words and it needs to start with a C."

Casting about for ideas, I remembered that Saint Cecilia is the patron saint of musicians, and decided to deviate a little from a standard charter text.  It's more SCAdian than period, but not so excruciatingly so that it bugs me.  I like how it came out and the actual finished scroll is truly gorgeous.


Cecilia, beloved and holy lady of music, we pray you look with favor upon your disciple Margreþe la Fauvelle.  Lend her sweetness of voice and sureness of beat; make her fingers nimble and her ear keen; keep her instruments in tune and bless the choirs she leads.

And then, upon 9 December in the fifty-second year of the Society, the Tsar and Tsaritsa, Ivan and Matilde, having heard the praises of the said Margreþe sung unto Saint Cecilia by the most noble of their many servants, did invest the said Margreþe with the Order of the Laurel, to have and hold the same freely and fully hereafter, along with the following arms by Letters Patents: Per saltire vert and Or, a sun in splendor counterchanged.  And so declaring, instructing and commanding, the Tsar and Tsaritsa set below their ensigns manual in perpetual memorial.

[1]  In seriousness, working with Mistress Arianna of Wynthrope was a delight.  She was just not as prepared for me doing my crazy thing with words in the way, say Eva or Thyra or Nataliia or Eleanor are.
Posted by Alys at 6:56 PM No comments:

As more and more people in the East are trying out the work of doing period charter-style texts, I want to promote and encourage their work.  So, from time to time, I'm going to have guest posts show casing certain wordsmiths and texts that catch my fancy.   If you or one of your students have a piece you'd like me to look over and showcase, please contact me at alys.mackyntoich@gmail.com


Today's guest post from Mari Clock van Horne ( +Marietta Messina ).   Her text was written for a Baronial award scroll for the Barony of Bhakail.  She worked from the Gelnhausen Charter, one of my favorite texts for adapting to the SCA.

Talking about her work, Mari says:  "I liked how it sort of sounded like he was in trouble, but clearly he wasn't. One of the parts of this text I liked most was how it put in the in the presence of but then went on to name nobles that were in attendance. Of course I changed that to be only Majesties and
Highnesses."

Here is the text, which was read in Court yesterday.


Memory is short and does not suffice for a crowd of things; therefore, the authority of those who preceded our age has decreed that those things were to be written down which the progress of fleeting time generally removes from the knowledge of men.

Wherefore let the generality of the present as well as the future subjects of our Barony know, that John Marshall atte Forde shall incur the sentence of our will. As he did not desist from frequent kitchening and was often caught preparing magnificent feasts, We call him before our presence, to answer for the repeated allegations; and We, by unanimous decree after consultation with the Order of the Harlequin declare him named thus and adjudge this to be our Will.

We, Rowen and Suba, Baron and Baroness of Bhakail,  hereby confirm that the above-written was done and caused to be done on the ninth day of December on the occasion of this Yule Revel in Renaissance Germany in the presence of Our Royal Majesties and Our Royal Highnesses, and wishing this judgment to remain valid unto all in posterity, we forbid that anyone, with rash daring, infringe it or in any way attempt to violate it; and we validly corroborate this our decree by the present document, signed by Our hands, with witnesses present at this deed.


Mari is also one of those talented people who can calligraph her own words, which always makes things easier. 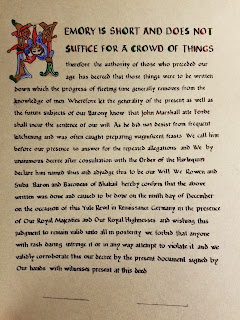 Mistress Fiona, whom I've known for more than 20 years, e-mailed me and told me she had been assigned a Silver Rapier scroll, and did I know this Lillia de Vaux person.    :-)

Despite her French persona, Lillia is extraordinarily knowledgeable in Middle English, and likely doesn't need the footnotes to know exactly what this says.  But I do love footnotes.  All scrolls should have footnotes.


[1]  A fascinating attested spelling of "Whereas"

[2]  The ȝ character is called a "yogh."  It's found in Scots and Middle English, and is pronounced like a 'y'.

[3]  Obviously once I used Vheras, I had to use the attested "revard" spelling.