For my cadet +Cathy Griswold's elevation, we decided to go Spanish, to fit her persona.  The magnificent scroll, by +Nataliia Hurd, was from a Spanish model, and +Rhiannon theCurious translated my English text (based on an original Spanish source) back into Spanish. 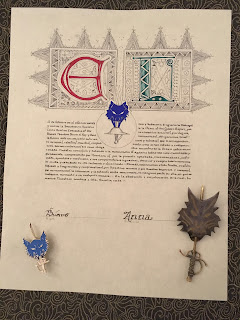 Here is the source page that Nataliia used for the C&I design:  https://www.bl.uk/catalogues/illuminatedmanuscripts/ILLUMIN.ASP?Size=mid&IllID=12793

Even though people thought the text very long, this is only 190 words.  It was structured so that the initial word could be in two large ornamented capitals, just as in model for the scroll.

On 11 February, in the fifty-first year of the Society, in our Royal Court at Concordia of the Snows, We, Brion the King and Anna the Queen, before a sufficient assemblage of peers, knights, masters, companions, nobles, and good citizens of the realm, granted and endowed Engracia de Madrigal with the Order of the Golden Rapier, along with all rights, privileges, immunities, obligations, benefits, allowances and entitlements attendant thereupon, as much as have been endowed to any and all other members of the aforenamed Order.  Our grant and endowment to the abovesaid Engracia, having been examined and fully understood by us, is hereby approved, commended, confirmed, executed, and ratified, and we promise to keep, observe, and fulfill all the abovesaid that is set forth therein, and every part and parcel of it, really and effectively.  We further renounce all fraud, evasion, falsehood, and pretense, and avow, for ourselves and for our heirs and successors, that we shall not violate the above-stated grant and endowment, or any part of it, at any time or in any manner whatsoever.  In attestation and corroboration whereof, we sign our names to this our charter.

It has become a tradition that the outgoing Bardic Champions write the scroll texts for their successors.  I was tempted to do the text in Middle English just because it is fun to work in that language, but it also limits the number of people who can read the scroll in Court.  As it turned out, it would have been particularly appropriate to do the scroll in Middle English, since the new Queen's Bard, +Wendy Gale, performed part of the Canterbury tales in Middle English on her way to victory.

Champions texts are hard to write in a purely period style, because there is simply no comparable model period document for an SCA "champion" position.  As a result, I ended up embroidering this text with language about why it's important to commit important events and deeds to writing.  The need to write stuff down in order to preserve the facts of an event against future uncertainty is a recurring theme in medieval charter-writing.

Anna, excellently honorable and honorably excellent queen of the East, to all persons of our realm, peace and health in the present, and the good of all goods in the future.  Since through the changeable course of time, which changes its position in various ways on account of the instability of human memory, things which were formerly done openly and solemnly are often rendered unknown, and thus the way lies open to errors, and the truth is very often obscured, good and notable deeds should, in a plenitude of wisdom, be committed to writing.  Thus, all of you shall know that, in our presence and the presence of assembled noble persons of the realm in our Court at Concordia of the Snows, upon February 11 in the fifty-first year of the Society, with the harmonious praise of many, Sabine de Kerbriant was proclaimed and installed as our Queen’s Bard, with all rights and privileges appertaining thereto, to have and hold the said office for the term of one year, according to the most ancient customs of the realm.  In witness whereof, We set our ensign manual below.
Posted by Alys at 1:23 PM No comments: