Texts adapted from the charters of Melisende of Jerusalem (plus value-added history!)

Just what it says in the title  :-)   Names redacted; they've already received the awards, but the scribes are still doing the backlog scrolls, so I'm doing my part to preserve what surprise is left.

Melisende (whose name is commonly recorded as Milisendis in Latin), is one of my favorite little-known historical figures.  She was a 12th century queen of the Crusader State of Jerusalem.  When her father died, he conveyed the throne of Jerusalem jointly to Melisende and her husband (Fulk of Anjou) .  Melisende was the key to Fulk's sovereignty, and, after a certain point, most of Fulk's charters are either issued jointly with Melisende or contain statements of Melisende's express consent.  After Fulk's death, Melisende ruled as queen and co-ruler with her minor son, Baldwin.  Their charters are also issued jointly, but all of the records indicate that Melisende was the true authority even after Baldwin grew into adulthood.  There was a great deal of tension between Melisende and her adult son over her continued exercise of authority.  In 1150, they resolved their disputes by splitting up the Kingdom between them, an arrangement that remained in effect until Melisende's death.


For information about Melisende and some of her charters, see here:  https://epistolae.ccnmtl.columbia.edu/woman/30.html

Unfortunately there's no current popular history-level biography of Melisende out there (that I know of).  I do recommend "Studies in the History of Queen Melisende of Jerusalem" by Hans Eberhard Mayer (http://www.jstor.org/stable/1291317) if you have a JSTOR account.  There's a lot of bad-to-mediocre historical fiction about Melisende, so be careful that what you are buying is history and not fiction.

It is in the custom of wise men to commend to the memory of writing their studies or works or whatever can be so disposed, so that it is impossible to erase it from the memory of moderns, and their successors may hold it virilely and imitate what their ancestors are testified to have done in the memory of the page of writings left behind.  Therefore, We, Omega and Etheldreda, King and Queen of the East, strive to dispose or arrange nothing in any way without memorializing the same in writing.  Let it be known, therefore to all, future as well as present, that having consulted with good persons of the realm, and being advised of the many works of [redacted] for the improvement of the arts martial in our realm, We do hereby endow the said [redacted] with the Order of the Silver Rapier, and strengthen the force of that endowment with all rights, privileges and liberties appertaining thereto.  We have further determined and established this endowment piously, strongly and sincerely, with the necessary impression of our ensigns manual, so that the said [redacted]  shall possess the said rights, privileges and liberties legitimately and peacefully and without disturbance.  So that this our endowment may be uncorrupted and immune from worldly disturbance, we caused our present letters to be read aloud before trustworthy witnesses.   Done upon [redacted] .

Lest with the space of times or years running their course the good works of a Crown slide equally from the memory of men, it is given over to be preserved by memorial letters and pages for its more certain notice and more firm efficacy. Therefore, desiring to inhere in all things to all their traces, We, Balfar, by right of arms King of the East, and Luna, by the same right the Queen, wish to make our will fixed and certain to all men, present and future.

Since the days of our illustrious ancestors, Vissevald and Embla, whose blessed memory shall enjoy eternal praise, the kings and queens of the East have honored those excel in the graceful art of dance with the symbol of the Muses.  Having heard excellent report of the grace and excellence of [redacted] , and willing and wishing that our realm shall be adorned in perpetuity with elegance and beauty, We do now by these present letters endow the said [redacted]  with the Order of Terpsichore, to have, hold and possess in perpetuity, without any contradiction, all of the rights, privileges and liberties appertaining thereto.

That all this may remain fixed, firm and undoubted, we have caused our will to be inscribed upon the present page, strengthened it with our ensigns manual, and caused it to be read aloud in our court.  Done upon 16 July, in Malagentia, in the thirty-fifth year of the Society.
Posted by Alys at 7:35 PM No comments:

Pension for a Retiring Vicereinne

I was pleased to be asked to work on the scroll for the retiring Vicereinne, Johanne i Visby.  I did the words and the calligraphy; my usual co-conspirator +Stacey Rothrock Steinfeld did the lovely illuminated capital. 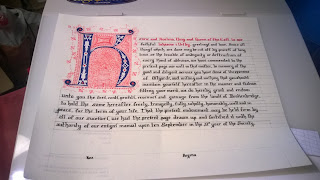 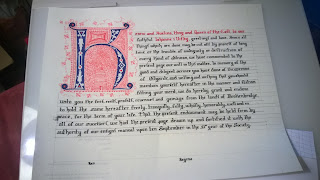 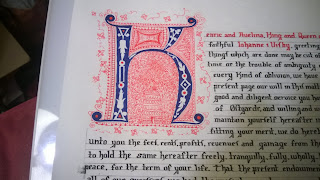 Kenric and Avelina, King and Queen of the East, to our faithful Johanne i Visby, greetings and love.  Since all things which are done may be cut off by process of long time or the trouble of ambiguity or destruction of every kind of oblivion, we have commended to the present page our will in this matter.  In memory of the good and diligent service you have done as Vicereinne of Ostgardr, and willing and wishing that you should maintain yourself hereafter in the manner and station fitting your merit, we do hereby grant and endow unto you the fees, rents, profits, revenues, and gainage[1] from the lands of Brokenbridge, to hold the same hereafter freely, tranquilly, fully, wholly, honourably, well and in peace, for the term of your life.  That the present endowment may be held firm by all our successors, we have had the present page drawn up and have fortified it with the authority of our ensigns manual upon 10 September in the fifty-first year of the Society.