So, your group wants to submit its Order names.  What kind of documentation does it need?  This post is a simple checklist for documenting Order names.

BEFORE ANYTHING ELSE: Are you using a language from a culture that had “orders”?

As stated in the April 2011 Cover Letter:

[S]ome times and places are just out of luck for the creation of herald's titles and order names. We have no evidence that either were in use before the 12th century, and only a few patterns were in use before 1300. That means that languages that fell out of use before that time (Old Norse, Old English, Frankish, etc.) cannot be used to create heraldic titles or order names, as there are no patterns for them to follow.

If the answer to the above question is "yes," then move on to documenting the order name:

(1) Document the pattern for the Order name:

Precedent allows for a few other Order names not listed in Juliana's article:  (a) the pattern of naming orders after the given names of individuals [Order of Taillefer, 5/2011 LoAR, A-Lochac]; and (b) the pattern of using the names of pagan gods in place of saints. [East, Kingdom of the. Order name Order of Artemis, 6/2013 LoAR, A-East].

For example, for the Order of the Blue Cup, Order is one of the designators found in Appendix E.

SENA NPN.1.B.2 permits a Lingua Anglica (modern American English) designator to be combined with a substantive element from another language.

When creating an Order name, the preposition matches the language of the designator.   SENA NPN.1.B.2 gives the following examples:

The substantive element(s) of Order names need to be documented.  The type of documentation needed is based on the type of the Order name.

If the Order name is one that uses a heraldic charge, the Pictorial Dictionary of Heraldry is the best place to look for evidence that a charge was used in period.

For example: To document the Order of the Blue Cup, a cup is a period heraldic charge, "found in the arms of de Argentine c.1244 [Asp2 216]" according to the Pictorial Dictionary of Heraldry (http://mistholme.com/dictionary/cup/).

Where the Order name is based on a personal name or a saint's name, use standard name resources to document the name.

For example:  For the name Order of Primavera, the personal name Primavera can be documented from "Feminine Given Names from the Online Catasto of Florence of 1427" by Arval Benicoeur (https://www.s-gabriel.org/names/arval/catasto/#alpha).  SENA NPN.1.B.2 permits the Lingua Anglica "Order of" to be combined with the Italian "Primavera."

By precedent, any name documented to period may be treated as a saint's name for the purposes of naming Orders. [Caer Galen, Barony of. Order name Order of Saint William the Cooper, 7/2006 LoAR, A-Outlands].

(c)  Check for consistency of language

The entire Order name can, if the group wishes, be in modern American English under the Lingua Anglica rule.  However, if using a foreign language, then the entire substantive element must be in the same language.

For example:  The Barony of Carillion submitted the Order of Saint Ruprecht, based on the German given name Ruprecht, which was found s.n. Ruprecht dated to c.1390, 1396 in "Medieval German Given Names from Silesia" by Talan Gwynek (http://heraldry.sca.org/laurel/names/bahlow_v.htm).  Since the spelling "Saint" was not found in German, the substantive element had to be changed to Sante to be entirely German.


(d)  Use only standard heraldic colors or their common vernacular terms

By long-standing precedent, order names that follow the color + charge pattern "must use the ordinary color term for a heraldic tincture appropriate for the language of the order name." [May 2009 Cover Letter].   More recent precedent now also permits "the use of heraldic color terms in order names as well as the everyday terms." [April 2012 Cover Letter].

Silver is considered the everyday color term for the heraldic tincture argent; Golden or Gold are considered ordinary color terms for the tincture Or.  [May 2008 Cover Letter].

However, to date, no convincing evidence has been presented for the use of non-heraldic color names, including the names for particular shades of a color, like scarlet or crimson. [April 2012 Cover Letter].

Order names using the color + charge pattern are usually put the color first, but, when using heraldic color terms, can put the color after the charge name.  [Stonemarche, Barony of. Order name Order of the Keystone Vert, 8/2012 LoAR, A-East].


(4) Document the words and spellings used

All of the words used in the Order name should be documented to period if possible.  This is most important when the word itself is the substantive element, such as where the Order name is based on a virtue word or personal name.

The Middle English Dictionary is available on line and is searchable.  It is an excellent place to search for period spellings of words.

The OED is also an excellent source, but requires a subscription for on-line use.

Shakespeare's plays are also good sources for documenting words to period and are searchable on line at http://www.opensourceshakespeare.org/

For French terms, Cotgrave's 1611 Dictionarie of the French and English Tongues is also searchable on line at http://www.pbm.com/~lindahl/cotgrave/

A similar searchable dictionary for Italian from 1598 is also available on line at  http://www.pbm.com/~lindahl/florio1598/

Designators are "transparent" for the purposes of conflict.  Thus, the Fellowship of Valor would conflict with the registered Order of Valor (August 1987, West).

(6) Putting it all together


For the Order of the Silver Hour-glass:

Order is a standard designator found in Appendix E.

The May 2008 Cover Letter permits "the use of Silver as the ordinary color name of argent." The spelling silver is dated to c. 1330 in the Middle English Dictionary s.v. aughte.

An hourglass is a period heraldic charge found in the arms of White, 1534 [Parker 335] and of von Kerstlingerode, 1605 [Siebmacher 179] according to the Pic Dic (http://mistholme.com/dictionary/hourglass/).  The spelling hour-glass appears in Shakespeare's Henry V (c. 1599), in the Prologue, scene 1.

For the Company of Saincte Yolente:

Company is a permitted designator for Order names per the May 2013 Cover Letter.

SENA NPN.1.B.2 permits a Lingua Anglica designator to be combined with a substantive element from another language.

Saincte is found in Cotgrave's 1611 French-English Dictionary as the word for a female saint (http://www.pbm.com/~lindahl/cotgrave/search/845l.html). 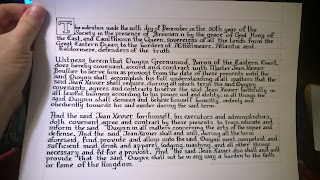 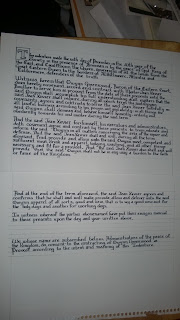 In several countries (but particularly in England), it was common practice to name children for holidays.  It is believed that these given names were applied to children born on these particular days, but that’s not certain.  Examples of documentable period given names based on holidays include:

The English also had a large number of surnames for people born on or near certain holy days or holidays.  Examples of documentable English surnames based on holidays include:

Candelmes[xx] (for someone born on Candlemas)

Paskes[xxi] (for someone born on Easter)

Myglemas[xxii] (for someone born on Michaelmas)